The Sonic Networks series is the result of installation collaborations between Melbourne based artist John Aslanidis and Berlin based musician Brian May.

History: The collaborations started in 2006 with May using the software synthesis programming language to create a generative composition for the painting Sonic Network No.2. This has developed over the years with the collaborative Installations being held in Berlin, New York, Melbourne and Sydney. One such work, Sonic Network No.11, is on Permanent display in the Hamer Hall, Victorian Arts centre Melbourne. This composition is fixed and can be listened to via the Hamer Hall audio guide when in the building

Methods: In the sonic network paintings John Aslanidis uses a set of mathematical intervals, which are relative to a grid on each of the four canvases. The drawing he derives these intervals from is akin to a “musical score”, which Aslanidis has used in composing the sonic network series. It is from these compositional points that Brian May has written an algorithm which determines the characteristics and timing of the tones in relation to the points as conceived in the sound piece. The (sine wave) tones created are audio representations of circular forms.
The sound piece uses the programming language SuperCollider for sound synthesis to compose, produce and play the piece, which is playing in conjunction with the painting from a computer through a custom installed sound system for the duration of the exhibition.
The sound piece is generative and infinite, with no fixed start or end point in the composition. This correlates with the idea of infinity, a basic element of the sonic network series.
Consequently, the interaction between the sound piece, the painting and the observer is always different, as the painting perpetually shifts upon being viewed, which is mirrored by the sound piece.
The intention of the sound is to create an equivalent of the reverberating patterns and geometric shapes, resembling the patterns in the painting. In addition to this the composer has taken into consideration the structure and composition of the painting and responds to the moiré patterns – represented via audio interference of the sine waves – known as beat frequencies, in the sound piece.
Using SuperCollider, Brian creates sounds which correspond to colours and forms emanating from the painting. Order and chaos is present in both the sound piece and the painting, the resulting effect being one of synergy between analogue and digital mediums. 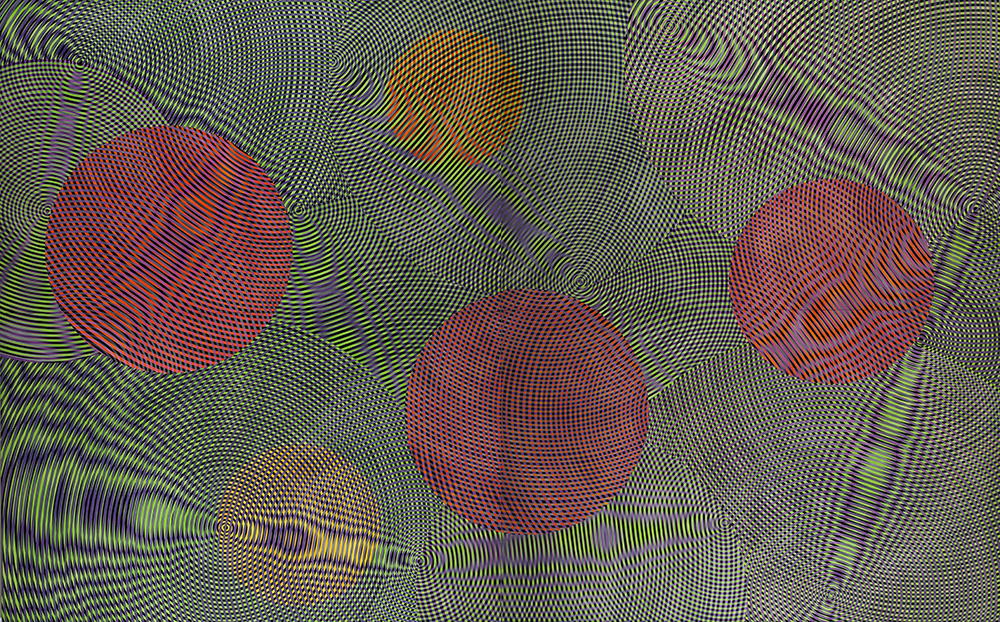