Rhythm Imprint #1: Detritus of a Memory with L Twills

Rhythm Imprint 01: Detritus of a Memory

Rhythm Imprint 01 is an aural theater piece composed for 20 channels.

The central theme of Rhythm Imprint 01 is the body. As a venue for power, it is reflected in its ambivalence as a threshold between subjugation and self-empowerment.

In the midst of fragmented memory frameworks, which surround us primarily through the media, the question of the relevance of the body in an increasingly disembodied world arises.

Sound, in its immaterial materiality, enables a change of perspective in this context: visibly apparent physical boundaries such as those between the inside and outside of objects and bodies

and emotions and model our sensory system of affects. In this sense, sound can activate and also control the body in a unique way. The modulation of affects becomes a powerful instrument

to create and experience spatial, relational and power configurations. Rhythm Imprint 01 begins with a rhythmic soundscape built up from rhythmic feedback loops, which forms the prologue

and then continues in two acts. Act I consists of a sonic 12-minute cut-up collage, in which different texts from neuroscience, memory science, critical philosophy, advertising and own texts are

The installation of Rhythm Imprint 01 is still in progress and depends on the respective presentation locations.

Rhythm Imprints explores the realm of sound as an interdisciplinary field and maps sonic deployments across a wide array: from soundinstallations, album productions, technological inventions,

“Sound machines through you onto the shores of your skin you´re in. The hypersensual cyborg experiences herself as a galaxy of audiotactile sensations.”

Therefore Sound, with its perceptual edges of infra and ultrasound (unsound), provokes a sonic way of thinking and understanding the world, that differs from the visual bias.

So if we are living in an acoustic world as McLuhan proclaimed, what does it mean for us humans or as Haraway says, us Hummus, for our bodies, sensations, affects, perception,

communities, society, technology and theory? If the human cyborg is acoustic, how does it change the way we look at the world and how is it possible to make use of this sonic knowledge.

Understanding ‘collective memory’ as the glue between individuals and communities, between perception and conception, Rhythm Imprints explores its embodiment in music and

the multisensorial connections between humans and sound as well as humans and machines; as “our machines are disturbingly lively, and we ourselves frighteningly inert” (Haraway).

The premise here is: no knowledge without emotions, no theory without practice. “What moves as a body, returns as the movement of thought.” 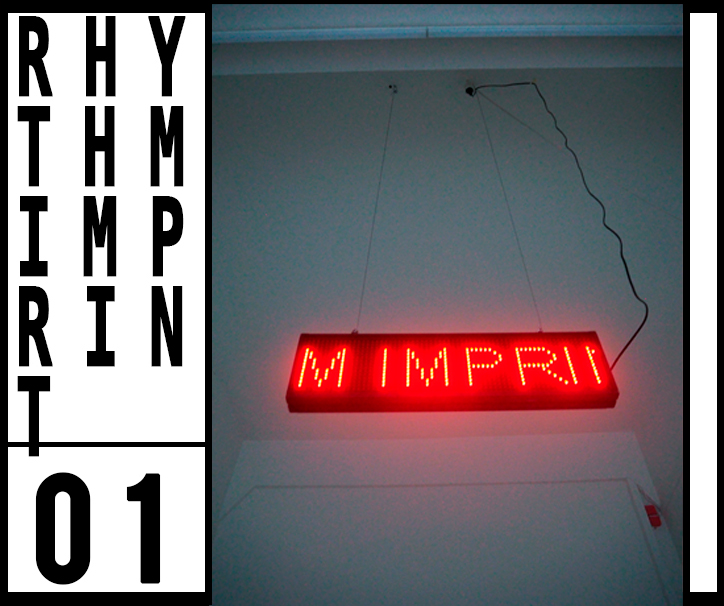 Rhythm Imprint #01: Detritus of a Memory