[RADIO EDIT CLEAN] is presented as an overlapping exercise composed of a layered playback of the hundred most listened tracks in their radio edited versions during the month of October, the selection has been done in accordance to Billboard’s ​HOT 100 list1 and all tracks have been re-sampled directly from YouTube playlists. This decision of obtaining the accumulation of the tracks by means of resampling and not uniquely as downloads follows a genuine interest in the loss of particular identification this tracks has personally produced throughout the years, a genuine sense of irritation oriented towards the recognition without any specifics linked to the people making this pop records that nevertheless we all unconsciously are aware of without knowing.

[RADIO EDIT CLEAN] therefore aims to explore the recurrent potential present in the duration of the pop hit through its structural reduction for broadcasting purposes to which we consciously or unconsciously are exposed to in our daily trajectories from A to B, on during the Pop-Up advertisements, pop hits which regardless of their integral recognition, contain a sort of spectral element that all of us can identify, a spectre which is the more present through its recurrent apparition. But there is a particularity of the recurrent apparition of pop hits in its trimmed version which does not limit itself to the radio edit, but carries the title as a description, for the radio edit becomes equally accessible in FM as it is now in YouTube or Spotify.

This work was produced and presented as part of the “Experimental Radio Practice” seminar of the  UdK Master’s program Sound Studies and Sonic Arts , which took place under the supervision of Lukas Grundmann at Cashmere Radio in summer 2019. 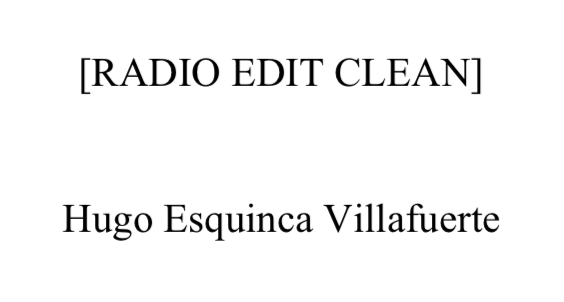