Tell Me Your Plans, Farmer… by G Lucas Crane

When the aliens finally come, we probably won’t notice. And if we do notice, we probably won’t understand. And even if we can understand, the aliens might be so far removed from our human concerns that it might not even be helpful that we acknowledge that the aliens have come. The aliens…could be very dumb. Who knows? We should just continue to keep abreast of our daily minutiae, just stay in our lane, and let the aliens flail helplessly with their ideas about us. Even as they execute their plans with massively advanced technology, trying to discern our plans becomes as ubiquitous as breathing – and just that easy to ignore.

Do we even have any plans worth telling? Why are the aliens so concerned about me?

This is the first hand account of one such alien encounter. A brand new type of alien encounter, unsatisfying and non-transcendent, frustrating and embarrassing, where the aliens attempt some sort of ill-advised operation and only succeed in making us a little more introspective, but just a myopic. This failed alien operation has real consequences, of missed lunch and a hazy confusion. Some light nausea. And the motivations of a technologically superior people are comparable to a frivolous neurosis about light-bulbs. The aliens have come and they are confused and motivated, and this is a terrible combination. They want to know our plans, but what are all our plans? Do we know what we really want? Is there really a strategic plan for our lives? What is the most important part of our plans? Do we even know how important our decisions are? (no, we don’t, we can’t.)

A Farmer is an important job for humanity. Whoever the farmer is, they are an important member of society. They have strong goals. Their deeper plans must be revealed. But humans just need a little motivation! And the aliens know how get what they want. By asking. Nicely. Surely, humans will believe in themselves enough to confess the important information!

This radio piece was written and directed by G Lucas Crane

The Voice of ‘The Farmer’ is performed by Kayla Elrod.

The Voice of the alien is performed by G Lucas Crane.

All voice recordings were made at ARGH in the Schillerkiez, Berlin

A note about the sound design:

All sounds come from a 20 year old cassette tape archive. They include a drum and guitar duo in the Arizona desert, a large metal drum with percussive spinning arms, a broken violin and a non broken violin, 7 people in a church in Iceland, an organ in the back of a magic store, a Brooklyn street, a street in Neukoln, Tempelof field, wind on the beach at Deadhorse bay, crowd noise at the silent barn, the band ‘Blissed Out’, 63rd and Lexington, Paris to Mulheim, a Yamaha DX-7, a Persian Yamaha, flute from a porch in Knoxville Tennessee, Harry Partch’s Chromelodeon, forest loops recorded in Franklin New York, A reverb room in Bremen, a small child in Blacksburg VA, and a generator in Stoneridge NY. 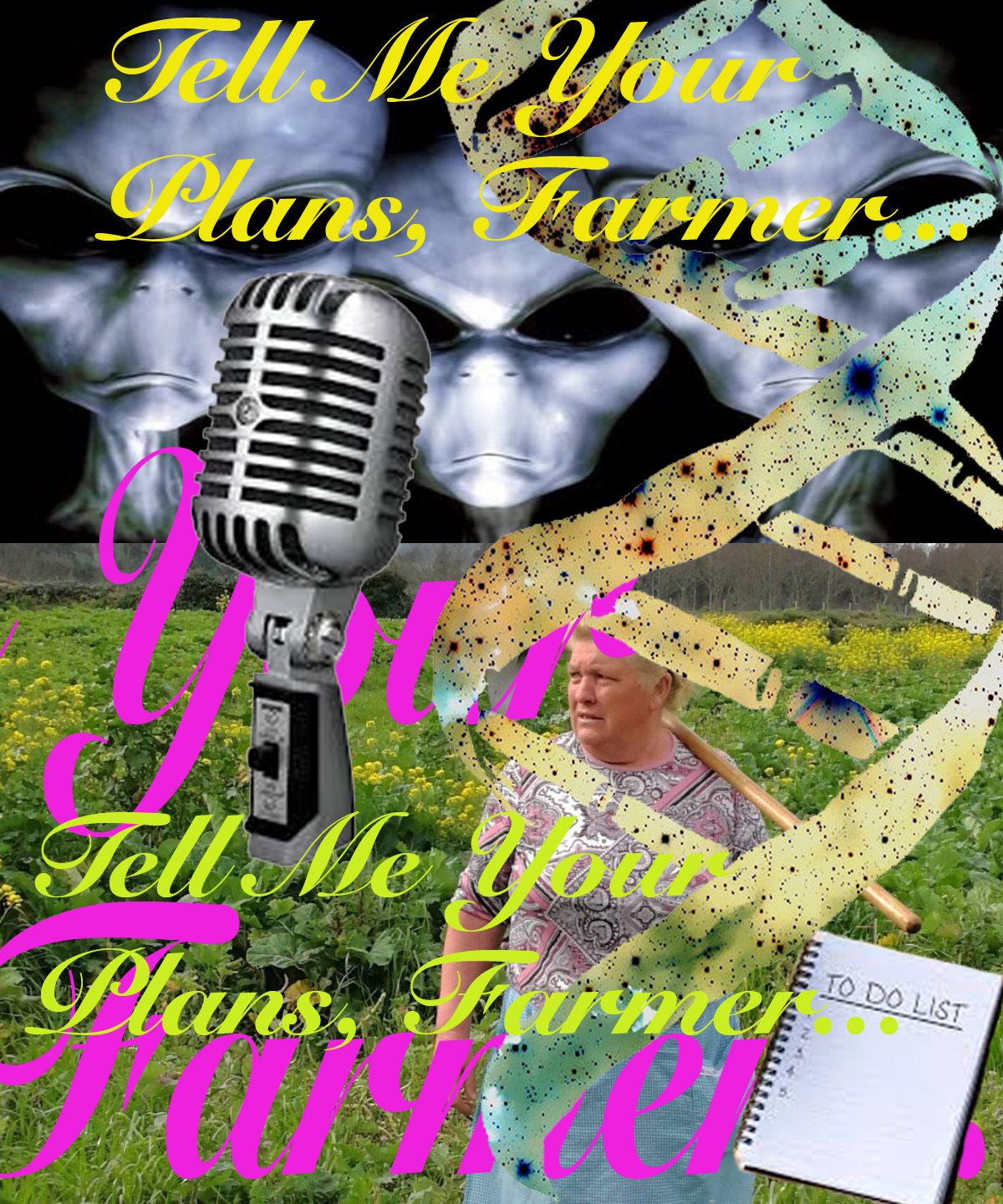 Introduction by Nina Guo
Tell Me Your Plans, Farmer by G Lucas Crane