Persimone is an experimental sound piece by Paulina Nolte with an introduction by artist Anna McCarthy.

Persimone, the fog princess, stringing up sounds, like beads on a thread. Her cheeks are flushed and her hair is dampened by mist as she climbs through the crevices of confusion. Melodrama is cut up, rearranged, and glued into roughly packaged collages. Unmixed and raw, the sounds guide her endeavors, like soft April sneezes. The pollen girls are awakened by the winds, sadness slivers its way through organ patches and sex appeal crawls up all six strings.

Alas, the night, in two brackets, holding time and place together, keeping her safe.

This sound piece will be released on the NYC-based cassette label Decontrol.

Paulina Nolte is an artist based in Munich. Her work primarily deals with recurring themes such as death and various forms of transience. The transience of the body, of nature and love. It usually threads together many mediums and often ends as a performative piece. By playing with theatrical and emotive elements, she finds herself examining a world of the absurd, spinning a web of dark humor, fear, and sometimes lightness. Her last solo performance and the release of her publication Desert of Unrest took place in the garden of the Lenbachhaus with Ruine München in July 2020. For Arts of the Working Class, a street newspaper established in Berlin, she made ink drawings for its 2023 issue, part of the Venice Biennale of Architecture 2021. She also performs in the band WHAT ARE PEOPLE FOR? by Anna McCarthy and Manuela Rzytki. 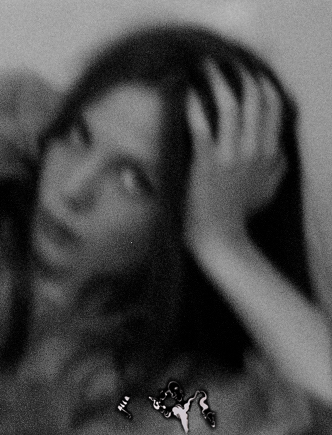