At least I’m in disguise of a sound artist. Actually I’m a slug.

Consider this a wig and these fake nails. I’m using the shape of a sound artist until I transform into my actual shape, like a fish that will eventually strip of its fins, vomit its swim bladder and drown.

Everybody thinks they know what an artist is. But most of them are wrong. Especially me. My imitation is cheap, mere performance.

The artist is a temporary existence anticipating their transformation.

Nevertheless some of these practices are often pursued until the actual transformation occurs.

This period of time is commonly referred to as procrastination. It can last a life time.

Transformation is a total change of existence. This change is not deliberate. It happens or it doesn’t happen.

One day the artist wakes up as an octopus or a guinea pig. They won’t be able to continue life like before. All camouflage boldly falls out of place. False ears, teeth and eye lids flake of their body.

The artist loses their job. They get locked into a room from which the furniture is successively removed, the walls are painted in sheer white.

When I transform, I will transform into a slug. Not a snail, but a slug, without a house or anything solid to it: no bones, no nails.

I want to be a leopard slug, because the name combines the slow and plump with the fast and elegant.

To a good gardener the leopard slug is known as a helpful creature. It leaves alone their lettuce while it feasts on eggs of other snails that are harmful to their plants.

If a leopard slug is recognized as such, it can lead a paradisiacal life. Like the hermit hosted in a royal garden, who in return shares their wisdom gained in solitude, or the artist, who creates artwork that can be interpreted as critical remarks on fascism, capitalism, inequality that they contribute to society in return for a residency or a scholarship.

The ear of course, is just the tip of the iceberg, the fluff of mold on the outside of a peach that the mycelium has already completely penetrated.

The ear is a prefix of one who desires to listen, but is damned to hear.

Hearing makes us discriminate and keeps us from experiencing sound as what it really is.

Sound is the vibration that emits from an object, and is carried on through an elastic medium and is received and perceived by a listener.

The object can be a cricket who’s wings are scraping against each other. The medium can be air, luscious, mild summer evening air. Its molecules are stimulated by the cricket’s vibrations, reaching out as pressure waves in all directions.

They find their way to a hidden spot where a little tent is set up. Inside the tent a listener is lying, resting or anticipating to transform into a centipede or a vulture.

The pressure wave carrying the cricket’s signal permeates the tarp, enters the ear, excites the ear drum and signals the presence of a distant cricket to the listener.

Without a listener, vibration isn’t perceptible as sound. Without a medium, sound never reaches the listener. And without an object generating vibrations, there is nothing to even begin with.

Only a fool would look at the loud-speakers, when Elvis is standing on stage singing into a microphone.

I decide to conduct an experiment.

I build a piezo microphone. Piezo is greek and means to squeeze.

Piezoelectricity is the electric charge that accumulates in certain solid materials in response to mechanical deformation—such materials are crystals and bones.

A piezo microphone, also called contact microphone, uses this technology to capture vibrations directly from objects. Compared to a normal microphone it is almost immune to air waves.

I connect the contact microphone to a transmitter that sends the sound to a speaker that is hidden somewhere in the same room.

The sensory and the auditory sensation are still synchronized in time, but they’re dislocated, separated in space.

Inside the test person’s brain a discrepance will take place.

I can prove that radio is a hoax, that music streaming is impossible, I can destroy Spotify and I can make Elvis rise from the dead.

I wait until the night then I leave the house. Sitting on a bench in the subway station, I watch the trains come in. I look out for a compartent with only a single passenger in it. Then I jump on the train.

The speaker is inside my bag pack. I drop it on a seat a few rows behind the other passenger and sit down right to the right of him.

I switch on the transmitter in my right pocket to establish the connection between the speaker and the contact microphone that is glued to my knee underneath my pants.

Then I start to bring my knee towards my neighbor’s knee, slowly approaching in the most inconspicuous way.

And then we touch.

The hidden speaker emits a rustling sound, not very loud, but audible. His knee jerks away and he remains sitting motionless. Processing the short-circuited sensory perception, his entire musculoskeletal system remains paralyzed for several seconds.

Then the abductor muscle on the inside of his thigh relaxes. His knee slowly comes back towards mine. It stretches out like a feeler wanting to verify what has just happened.

Anticipating the imminent touch, there is a raise in voltage where the nerve ends of his knee and his eardrum meet. His eardrum starts to flutter. His knee touches mine, a little too soon maybe, too hastily.

The speaker pops. His knee bounces back like from an electric shock. At the same moment the passenger pushes himself off his seat. The weight of his body sinks into the void, where his knee should have been, which is still retracted from the shock. He topples over, his hip rolls over my lap and his body crashes into the aisle.

As his body hits the floor, it does so quietly. His clothes sag to the floor as if there was no body inside of them. A viscous pink mass flows out of his sleeves and both of his pant-legs.

The subway comes to a halt at the station. In a moment, someone will board at the rear door.

I bend down and make knods into his sleeves and pants so that the pinkish viscous liquid doesn’t spill out completely. I swing the slime bag over my shoulder, grab my bag pack from the other seat, bump into the person boarding the train, say “excuse me” and dash out the closing door.

At home, I pour the liquid from the unknown listener’s clothes into a bucket and put it in the refrigerator. I haven’t yet had the time to comprehend whether my experiment proved my point. Unexpected was the sacrifice: a human being has disolved into a pink viscous mass. I want to make up for it.

The next day I go to the hardware store and buy a bag of plaster. I start to mould a large ear. As large as I am and much wider. Then I mould another form around it, the negative form. I carefully remove the inside plaster with a chisel. And then I pour the pink mass into the form.

The next day the liquid has solidified, not hard, not limp, more like cartilage. I break away the plaster around it and retrieve the ear.

I open accounts on all dating platforms. I take pictures of the ear listening to adorable dogs, to the snowy mountains, to a pool, to a wall painted with angel wings.

On its first date the ear gets asked a lot of questions:

Where are you originally from?

Do you have sisters or brothers?

What are your parents doing?

Do you remember the best day of your life?

Can I kiss you? 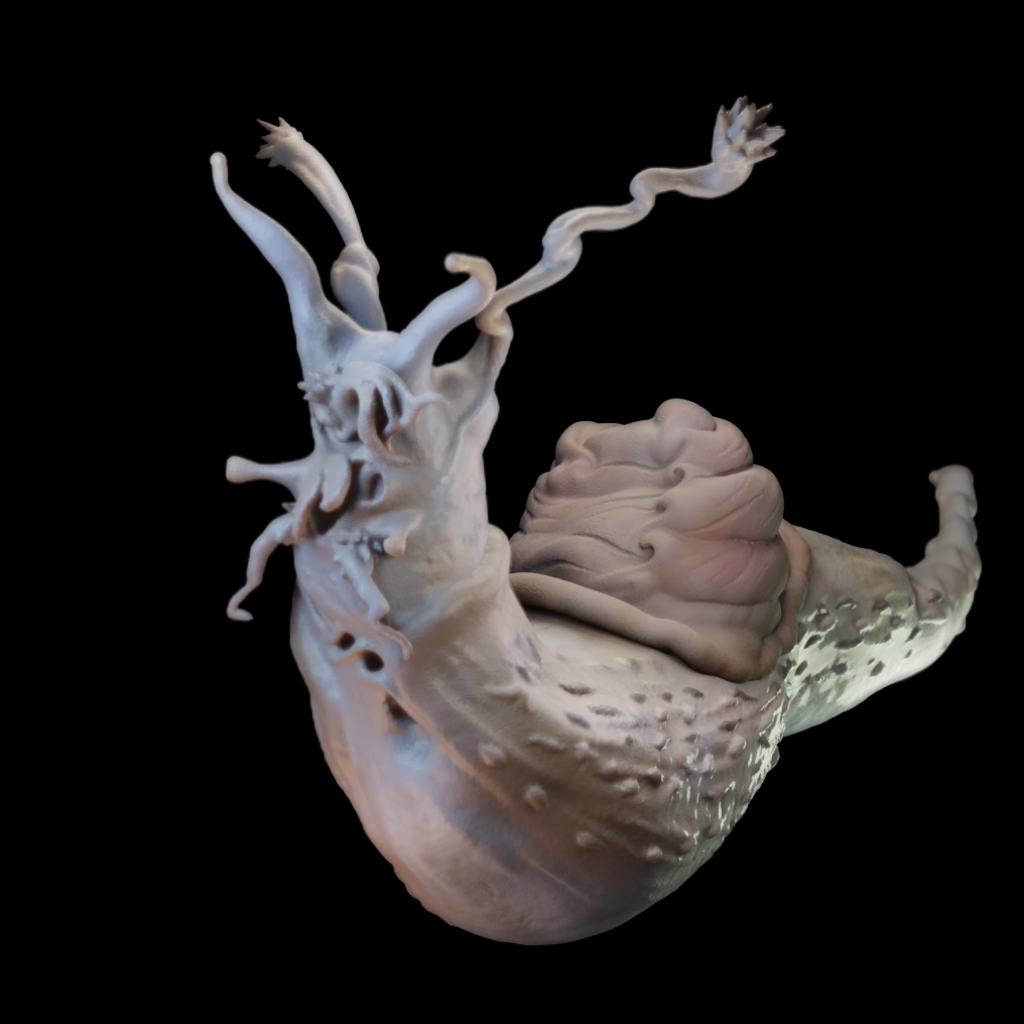